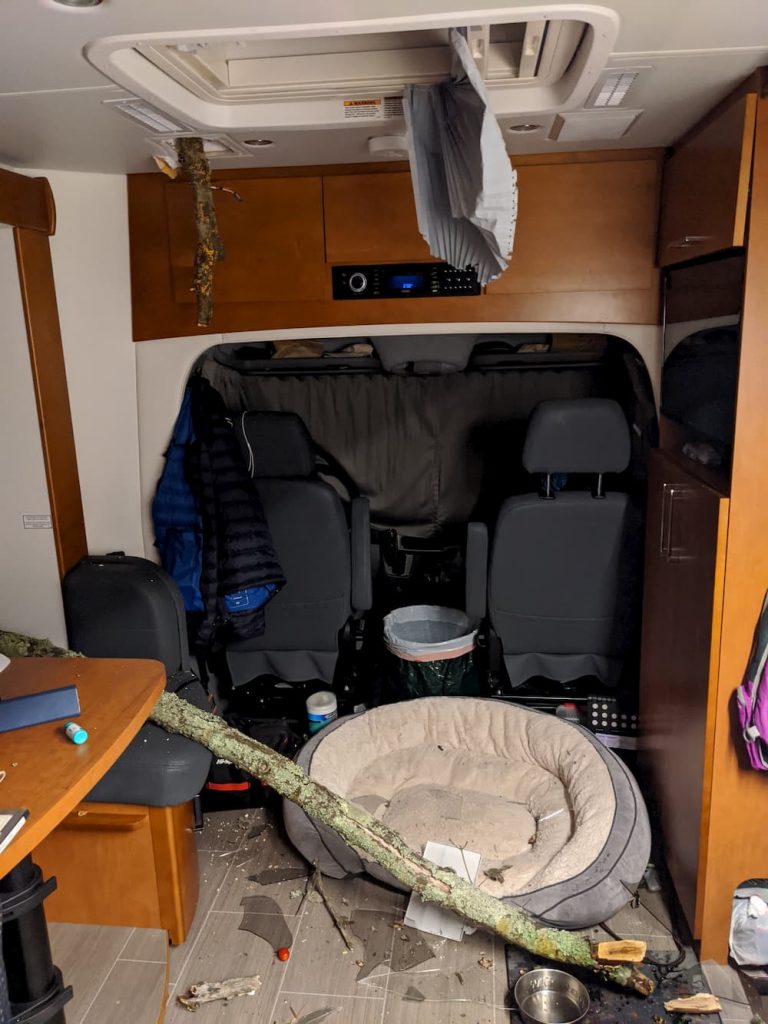 Santee SC is pretty nice as state parks go. Its convenient to 95, full hookups (better to have AC in the steaming July heat), and water and hiking activities.

But this was just a quick stopover for us. We did a few miles on the trail but in the July inferno and rain that was about it. No water fun as the dog was with us…

The hiking trails are nicely shaded and you can walk right from camp which is always a plus. Overall I’d give Santee a nice rating and always good for a stopover.

On the second and final night around 3:00 AM we were awakened by a deafening crash. It sounded to me like some camper had crashed into us and shattered the windshield and destroyed the RV. On top of that, Weston the dog was literally trying to climb into the bed which he never does.

As we tried to get our heads around what was happening we were greeted with the wonderful sight above.

This javelin shaped tree branch on the floor apparently fell a considerable distance, picking up speed and shattering the skylight with deadly aim. It appears it landed in the dog bed, temporarily sharing the space he was occupying. We think it landed just a few inches from his nose.

(Amazingly he was just fine but need some persuasion to go back to bed later) For context here is Weston in his bed when trees aren’t crashing all around:

Of equal improbability the second smaller spear came through one of the speaker mounts. As an aside neither the speaker nor the grill seem damaged they just bounced onto the couch. Some damages to the plywood and the ceiling headliner.

Everywhere there was Plexiglas and bark.

I dreaded going up on the roof. For one thing I was horrified I would get hit with some more of the tree, and at 3 AM I couldn’t see shit. But also I expected to find the rest of the tree that wouldn’t fit through the hole and was wondering if I should call a crane or a backhoe.

But the roof was almost clean. A few branches and debris, one of the solar cells shattered (they are to be replaced anyway) and the skylight is toast of course. Also a 3 or 4″ hole where the smaller spear came through the speaker box.

We were on a vacation run from Tampa to Maryland. It has been raining for days so after sweeping the roof and applying a coat of duct tape we turned around and drove home where a covered storage lot will keep it safe until its repaired.

I’m normally not too philosophical but the branch is laying on the U-lounge seat where I was sitting just hours earlier.

And oh yeah, one more reason I’m glad we have a corner bed. I’m also pretty sure if we didn’t have a dog we’d have slept through it as I remember thinking anything that loud and horrific must be in a dream.

Well just about a month later and most everything is repaired. A local RV paint and body shop repaired the roof and touched up the paint. You can’t really tell anything was done except they slopped new Dicor all over the front molding cap which was a reasonable thing to do and can’t be seen from the ground.

The skylight turns out to be a hard to find German made part. Its no longer made but the replacement is about the same thing with a smoke black top instead of clear. Its called HEKI MIDI. There is a German distributor selling it on EBay but in a series of emails I could never get a straight answer on whether the plexi top would fit the old frame. He was very helpful but I think the language gap just couldn’t be overcome in emails.

And I needed a replacement shade. I ended up ordering from LTV instead – the whole new assembly. That way I could use either just the parts I needed or replace the entire skylight.

It turns out the new parts fit fine without digging out the frame.

The body shop did a nice job, but getting the ceiling to look perfect is almost impossible since LTV doesn’t use any trim and the original cabinets were installed AFTER the ceiling header was glued on.

So I would say the job they did was pretty good but I see some slight flaws if you know a big chunk of the ceiling was replaced.

To improve the appearance I installed a piece of cherry molding across the front cabinet where it meets the ceiling. The body shop had installed generic white molding over the flaws but the cherry looked a lot better.

So in the final picture below it looks more or less perfect.

On the road again!