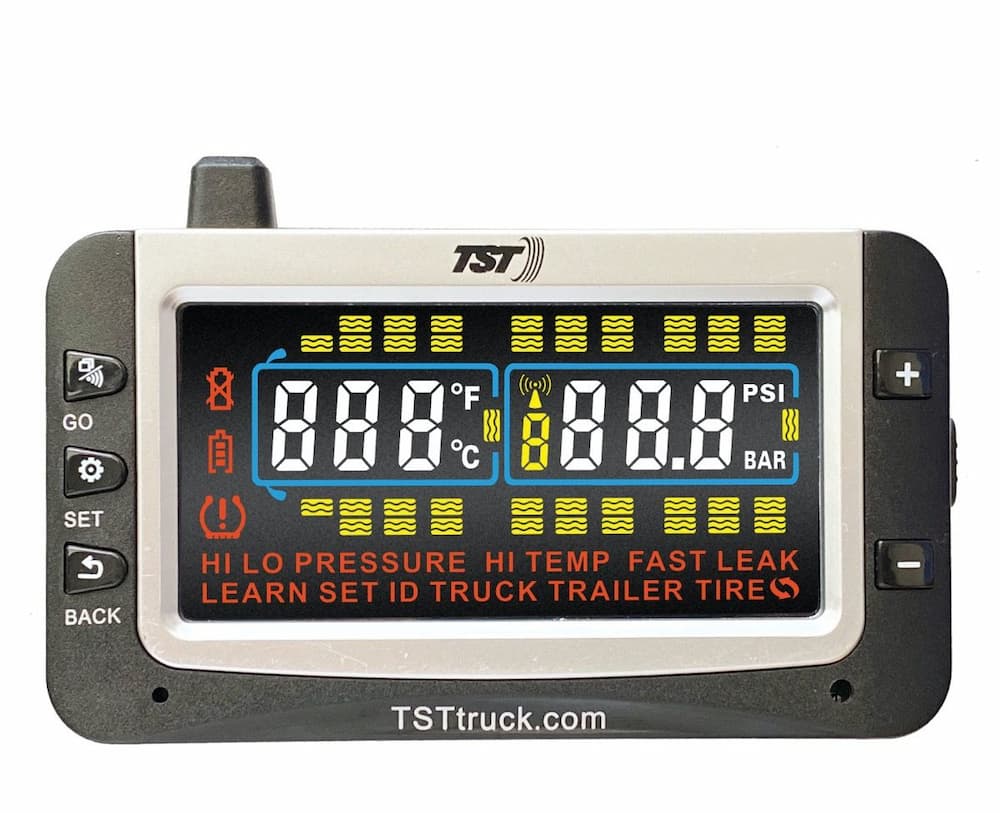 Finally! TPMS. And no, you don’t need to install Borg stems!

Here is the background: Many people buy DIY TPMS off the Internet, and have their stems crack on the way home or after a short trip.

The reason is usually due to either a rubber valve stem, or more often, a dually valve stem extension. Either is likely to fail with (relatively) heavy TPMS screw on caps.

The solution is most often Borg One piece metal valve stems. These beauties replace your factory stems, make adding TPMS or checking air easier, and ought to be standard. So I actually bought this kit. This is the DL1SPAA Borg Dually Valve kit for my Alcoa Aluminum Wheels:

As you can see these are sturdy one piece metal stems. The rubber grommet or stabilizer goes in the outer dually to keep it from vibrating.

The main issue is, they are a bit of a bear to install. Tire guys don’t like to read instructions, and as a result, there are many horror stories of botched installations and stranded RVs.

So, I started researching alternatives. It turned out that my Sprinter already has metal valve stems. The outside dually stem is just facing the wrong way. The inner dually has a long metal stem and a metal extension threaded on to that.

I saw posts here and there about skipping the Borgs, and it inspired to give it a try. After all nothing would be lost and I can always install the Borgs later if I’m not satisfied.

Note that the impetus of this delay is that my Sprinter never needs air. Literally. (I believe the occasional drop in 1 lb. is due to me checking air before each trip.) So if my project makes it a bit harder to add air in the future so be it.

So lets get started!

First, the front wheels. Well that was easy. Since the factory stems are sane, you just thread them on with the locking nut per instructions.

Next, I tackled the outer duallys. This was relatively easy too. Just thread them on, and skip the locking nut. The locking nut is an anti-theft device; they will not fall off without them. (I could have used the locking nut, but since I will have to remove them once or twice a year to add air it didn’t seem worth the bother.)

Note that I might just as well have applied the non flow-through sensors here – but I may want to get the Borgs installed with my next set of tires, so I purchased flow-throughs.

And finally the inner duallys, which I was scared of. I assumed the extensions would be hard to remove, but I was wrong. It turns out if you stick your head between the tires you can just see the nut that is the base of the extension:

In the photo above near the bottom you can just see where the extension starts. Its an oddball size but an 11 mm or 7/16 SAE wrench was good enough for me. (They are slightly too large, so I am guessing its maybe 13/32 or something.)

They practically fell off with about 1/8 turn from my wrench which I could just barely reach in with.

(Note that the wrench was not my first choice. Because I had assumed the extensions would be hard to remove I actually bought a Truck Extension Service Tool thinking I could just reach in and remove them. Nice try, but mine are cocked at an angle that I couldn’t get the tool in.)

Once they were off, because I had planned the install, I used the Ken-Tool KEN29999 Valve Capper PRO (Amazon links below) to stage the TST sensor cap and (fairly) easily thread it on.

As you can see this tool is designed to remove the valve caps from inner duallys. In fact, it works so well that I now wonder why LTV even bothered to mount the metal extensions. With a standard dually chuck you can easily remove the cap and add air if you have this nifty tool. (Even if I didn’t have TPMS caps I probably would not reinstall the extensions.)

But, using it backwards from its intended purpose, I used it to start the threading which, again, was relatively easy.

Lastly I could (just) get my fingers in the wheel slot and tighten the sensor cap. It was a bit tricky because I have short fingers but I got better at it by the second dually.

You would think I would shine up my wheels for these pictures, but heh, its my blog…

As you can see the sensor cap is about an inch back. I could remove the cap to add air but the Ken-Tool makes it much easier.

So just like that, its done! The only cap that will have to come off to add air is the outside dually, which is quite easy to remove. The inner dually should be easy to add air with a standard offset head dually chuck, and of course the front too.

I can easily reinstall the extensions if (for some unimaginable reason) I wanted to.

Now I can enjoy my TPMS without worrying whether some tire guy read the Borg instructions thoroughly or not. Will I ever install my Borg stems? I am not so sure now. Once a year I’ll have to remove the caps to replace the batteries. Based on my experience so far it looks like about a one hour job if that.

Well its literally only been a few days. Normally when I install something I have buyers remorse. Could I have done it better? Is a better part available? In this case, I’m still really pleased. Yet another Borg Horror-show on Facebook makes me think I made the right decision.

So, one of the inner duallys was low by one pound. I try to keep all of the tires at 62. Now one pound is probably within the margin of error, and not even worth opening the toolbox over, but I was interested to see how easy (or not) the inner dually would be.

I had previously noticed that my “straight” dually chuck probably would not work. The outer wheel is a bit in the way. So I looked on Amazon for an offset dually chuck (Amazon link below) and got same day shipping (bless you Amazon) and,

It was a piece of cake! Used a flashlight to be sure, but popped the air cap off with the Ken Tool (could have used my fingers) and pressed the dually chuck straight at the flow through cap, and topped it off in 2 seconds.

If you look at the chuck I used below you’ll notice it has a small head and is offset so it easily slips behind the wheel.

I’m honestly thinking at this point that I’m unlikely to ever mount the Borg stems.

Here are the parts I used.