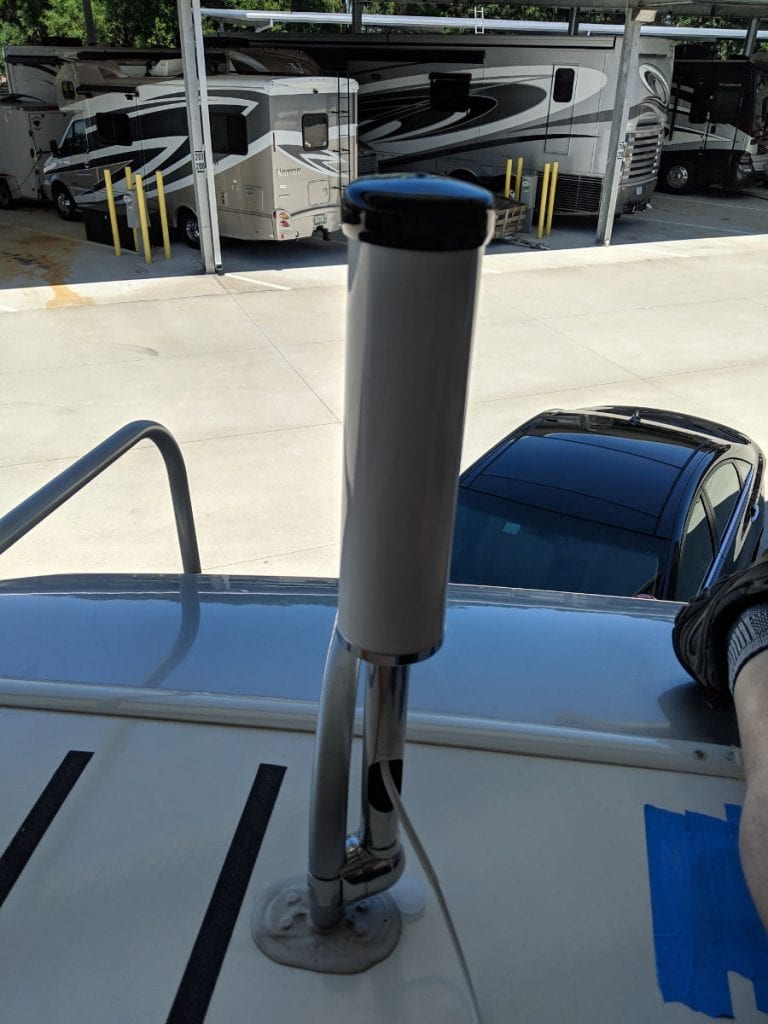 Sooner or later, if you have an RV, you are going to discover that some of the nicest places you would want to camp don’t have any cell service. None. Nada.

Now, some people might think that’s just fine. But I have a job, and can take emergency calls round the clock, even on vacation. Its rare but it has happened, and I need to be available.

There is also the safety factor. I’d hate to wake up clutching my chest and realize nobody can dial 911.

RV Internet seems fragmented into two camps of dogma. One group says you need to get a “MIMO” antenna, mount it on your roof, and then plug into a device that supports – for example a Verizon hotspot.

Another camp suggests “cell boosters” which again, have an antenna on the roof, only they broadcast a weak signal inside and you can use your phone or a hotspot.

(Actually a third camp says 5G is coming and its all a waste, but last I checked, some remote areas are still running cell equipment a decade old so I’m not expecting 5G in the wilderness anytime soon)

I settled on trying out a cell phone booster first, as we have multiple devices (2 phones and a hotspot) and it would be much more convenient to be able to use them all.

So weboost (supposedly) is a cell service amplifier that will turn that half a bar service into something better.

For starters, I googled around and a few people posted about using the “satellite pre-wire” that my RV has. That sounded great! Just mount the antenna on the ladder, and connect up the inside unit, and I could finish the whole job on a saturday.

Unfortunately it was not to be so….

First I needed to mount the antenna, only the provided clamps that come with the RV antenna are really junk. Plated steel C clamps. They look like the kind of thing suitable for a doghouse or a flagpole – and I have neither.

In addition, they don’t fit my ladder, and even if they did, they would scratch it up terribly besides ruining the appearance.

So for my initial testing, I just stuck the antenna on a cardboard box and placed it on the roof so I can measure how great this thing worked.

Next, my RV has a satellite pre-wire here:

I’m standing on the ladder in that picture and that little round plate covers the hole. So I just scraped off the dicor, popped out the plate, and connected the coax cable there to my temporary cardboard box mounted antenna.

Then back inside the RV, hook everything up, and connect the weboost to the satellite pre-wire coax plate using an adapter.

Then I powered on the weboost. I have read in numerous places that you need to place the phone literally an inch or less from the inside antenna. So I conducted speed tests with the weboost both on and off and…

Surprise! With the weboost powered on my speed dropped from about 10 Mbps to 5 Mbps, a 50% decrease. On a bright side, the phone showed a substantial increase in cell phone signal or db or “bars” as its commonly known, but what good is that if your speed is effectively 50% of what it used to be.

Well that doesn’t seem right, but I had two possible explanations. The first was you really are not supposed to hook it up to some random coax cable, but use the provided one.

And the second is that who cares how this thing works in a decent signal area. Maybe I would get better results in the wild boonies, where it matters?

So first I set about testing the pre-wire cable. It did seem that using the included cable produced a much higher cell signal, but again, it did not translate to any speed improvement and in fact it was still 50% worse than with the weboost turned off.

So back to the drawing board. I decided to buy the pricey marine antenna, because you can buy many different nicer stainless steel rail mounts. I guess weboost assumes people that have yachts take more pride in what their antennas look like.

So back to the RV, now it looks like this:

Thats my leg sitting on my roof, with temporary painters tape over the hole. I’m assuming now I’m going to have to drill a new hole in my roof so I can use the correct cable, but that will only come later if I can prove this really works.

At least this antenna looks great! That’s part of my theory on installing stuff. Make it look great first and then get it working.

Unfortunately the results were even worse that before. Some signal increase (way less than the RV antenna though) and a 50% reduction in throughput.

At this point I called weboost tech support who were remarkably available and friendly. They agreed it didn’t seem logical that the marine antenna was worse than the cheaper RV antenna, so they sent me a new one, no questions asked. Very impressed by that, anyway.

One thing that did bother me about weBoost support – he kept saying I should measure the signal db (I already had) and verify it was “boosted” (it was) but didn’t really respond to my complaint about the speed being worse except to say that shouldn’t happen.

So I received that new antenna today, about a week later.

My plan on Sunday is to drive 3 hours to a rural state park in Florida, where I can test the weboost in real world conditions in a location that has barely any cell service. If it seems to work at all I am then going to methodically speed test 4 possible antenna hookups:

I’m crossing my fingers, and hoping that one of those combinations will produce some decent speeds before going any further.

Well, I took an entire day for a round trip to drive to Manatee Springs State Park. This is the infamous state park in Florida that has NO Verizon signal most of the time, but not so far from town that it would seem hopeless.

Pulling into the park I had high hopes, but I regret to say that the weboost didn’t work at all. Sure, it raised my signal db and “bars” by a whole bunch, but my phone was still incapable of transmitting or receiving any data. I tried all 3 of my antennas.

Unfortunately I didn’t think to test voice or text – there could have been some improvement there, and that would still make the weboost useful, so I will test that in the future.

Why so many positive weboost reviews? I can’t figure it out. But so far for me I am not seeing any data boost anywhere I go.

Maybe its like vitamins. Almost every study has shown that the vast majority are of no value, and yet the majority of people think they do something good?

In the meantime on to plan “B”. I ordered a MiMo rooftop antenna and will text what effect that has on my Verizon 7730L hotspot.

The Mimo/Hotspot worked out better than the weboost so I decied to go all the way with “The Mother of All Internet“.