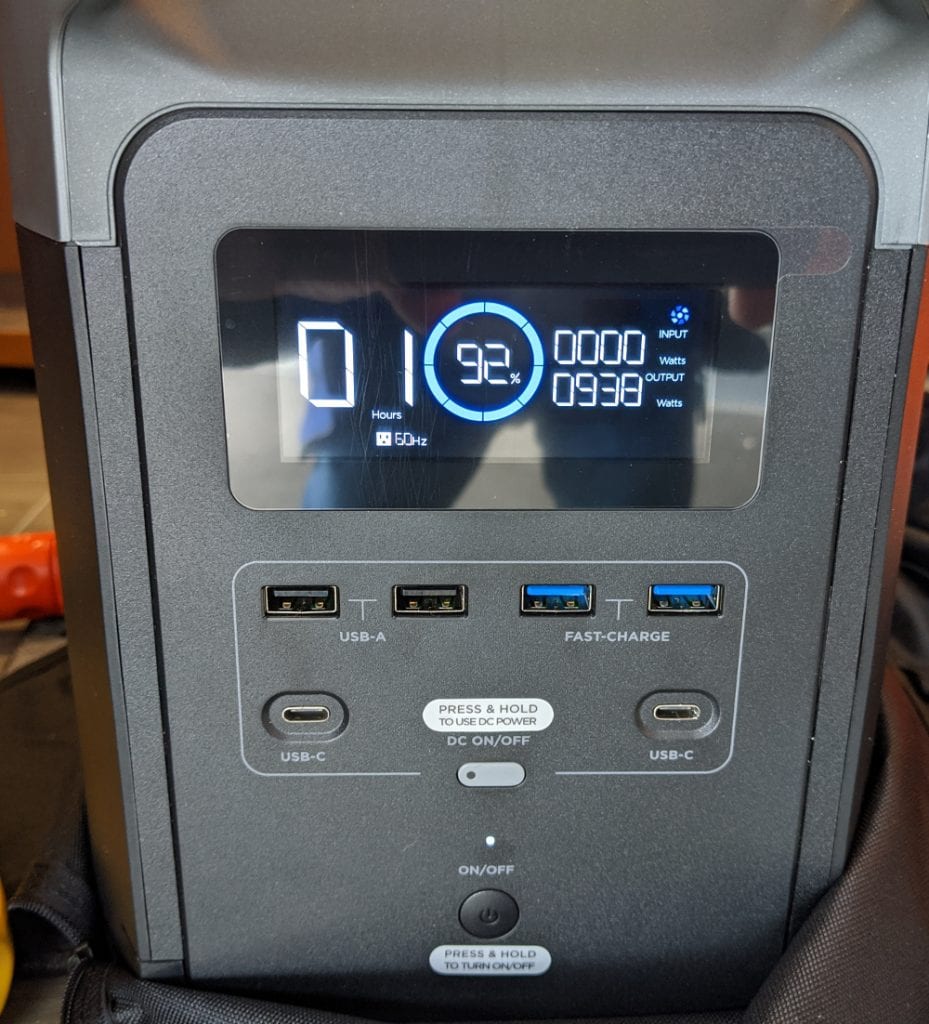 So this is one of those newfangled devices that you have to stop and explain as it didn’t exist just a year or two ago.

It’s a Lithium “generator”, meaning it works like a portable generator only it uses a battery instead of gas. They haven’t made huge inroads yet, because for a homeowner a typical honda or even a cheap clone gas generator will run circles around it in terms of output. You can pour gas into a regular generator all day. With these once your battery is exhausted thats it.

But this one breaks new ground though. Specifically, its 1260Wh. At around 13 volts that about 100 amp hours, or about as much as one Battleborn lithium battery. Its can output 1800 watts, i.e., just about anything you can gang up on a 15 amps circuit.

The other amazing thing is you can recharge it in like an hour and a half.

So think of it as a lithium battery, strapped to a handle and an inverter and a charger, and you get this picture. So what can you do with it? Plenty!

Its real value for me though, lies in its RV utility. I have two main things in mind:

My RV is stored in a storage facility and lacks power. Even with the battery switched off it has a parasitic load. And even if I could trace that down, I am always there tinkering with it and using up power. I used to have to run the generator frequently to top off the batteries.

Don’t believe the Onan line that the more you run your generator the better; that’s a load a crap. Exercise it twice a month and use it just when you need it and it will last almost forever. Once you get a lot of hours on these they are finicky and expensive to repair, so I prefer to use mine mainly as needed on the road.

So now I just pull out my shore power cord and plug it into the Ecoflow to recharge the RV. (Note: If you try this be sure you don’t have or bypass a built in EMS protector. They don’t like to run off this kind of a generator!)

The other main use is, when traveling as a backup battery. Particularly in my case, now that I have a compressor refrigerator, there is a constant demand for power.

With only 2 coach batteries, even with lithium, there is not a large margin for error. I’ll carry this with me and if I run low I can top off the RV anywhere, even if I’m in an area where generators or banned or restricted.

So far its working fine. I do have a couple complaints.

First off, this is a young company just coming up to speed. Its universally said that their customer service is a disaster. They don’t answer the phone and open emails days later, if at all. While I appreciate its a couple young guys whose kickstarter campaign just went viral, it really is time to hire some help guys and stop trying to do everything yourselves.

Fortunately I haven’t had any issues yet.

Second, like many portable generators it lacks any ground-neutral bonding. This means it completely lacks the ground plug. (Some “contractor” generators bond the neutral to ground and I wish they all did this.) It seems safer and more convenient to me.

Why don’t the rest? Well, if you have a big generator and you are running your whole house with it, your main panel already has neutral bonded to ground, and you only want one bonding, hence most portable generators have a floating ground.

But realistically, nobody is going to use this as a whole house generator. They should have just bonded it at the generator.

So far I am really thrilled with this thing. It will be a great way to carry a huge amount of power. At 30 pounds its easy to carry even with one hand.

About the only negatives I can say about it is sometimes under load its inverter has a bit of a whine. Not terrible.

The other thing is, its Lithium Ion, not LifePo4. The claimed lifetime is 800 cycles but by then its been reduced to 60%. So just taking a wild guess I’m thinking maybe 400 cycles would leave you at 80%. I doubt I will charge it more than once a week (if that) so it seems an acceptably long life of almost 8 years even with weekly use.

Somebody on the internet pointed out that for many RVs sold with a couple of lead acid batteries this doubles the useful capacity.

Still love this thing! When we had an extended power failure I offered it to a neighbor. (We have a natural gas backup generator).

Also its available on Amazon now: