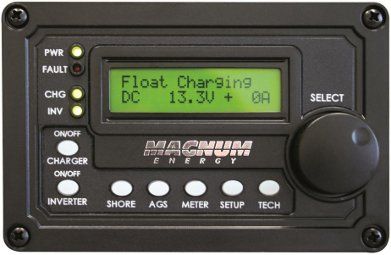 Note: This is an older post and I have subsequently upgraded to 300 AH of Renogy Lithium and a Xantrex 3000 XC Pro Inverter.

Which leads me to the Magnum Energy ME-RC50 Remote Control. Turns out my RV comes with a crappy remote control in “old geezer mode” that prevents much customization of the stock Magnum MMS1012 inverter/charger that I have.

While 2 Battleborn Lithium batteries are a “mostly” drop in replacement, there are a lot of posts in the Internet about that limiting the charging of Lithium batteries properly without a specialized Lithium charger.

Even with the expanded remote control, some people have not been able to make the factory charger work properly, but I am betting I can. The newer revisions of the magnum chargers have more features.

As a last resort, even if I install this remote and I absolutely am not satisfied with the shore power charging, I can always install a small cheap Lithium charger to supplement it, while keeping the original inverter.

I don’t feel the need to upgrade the Magnum inverter as it otherwise is adequate for my needs.

First off, note that there is an even more advanced remote, the “advanced” ME-ARC50. The differences seem to be its integration with the Magnum battery monitoring, which I don’t ever plan to use ( I have the Victron monitor installed instead see Victron BMV 712 Install

I think this Amazon comment sums up the differences:

The most significant difference is that the advanced can be used with the me-bmk battery management kit which allows some very useful additional functionality (in my case one thing it does, aside from measuring battery state
of charge, is allow for generator control based on state of charge). To really get full value from the advanced you will need the ME-BMK along with ME-AGS generator start. Otherwise the ME-RC is probably all you’ll need.

This remote is plug compatible with the smaller factory remote (ME-MR). So I opted to install it in the overhead panel where all the factory controls are mounted. So no wiring! Just unplug the old one and plug in the new one.

The overhead meter panel looks like metal, but is actually plastic, so this is a lot easier than it looks.

Also, it helps that I don’t have the levelers that everybody orders these days. That would have filled the panel. (As it turns out, I am glad that I didn’t get the levelers – as once I get the compressor fridge, leveling is largely just a comfort item and I will be doing a lot less of it!)

So it’s simple if a bit tedious to remove this panel.

Once its dangling, a couple of the advanced controls have easily detached plugs. The slide control has some crappy factory “el cheapo” crimp connectors, one of which fell off and I had to re-crimp. The tank level gauge I opted to leave connected and just unscrewed the gauge.

Once everything was detached, it was very simple to make a new square hole on the far left.

I just carefully drew the outline on on the back of the panel, and then used a dremel plus a carbide wheel to cut out the area.

(The carbide wheel seems overkill for plastic but it’s advantage is it cuts pretty clean without all the melting you otherwise get.)

Finally, just reassemble the panel. (The tank gauge is still dangling – I’ll connect that later). Note I took the scrap piece I cut out, trimmed it a little, and mounted it behind the old hole where the previous remote was. I’ll probably put something there someday, like the Victron battery monitor remote.

Then after mounting the panel the final result looks like this:

The remote seems to work fine, and has all the features and options that will let me tweak the settings to (hopefully) play nice with the new batteries.

And actually was a lot easier than I thought it would be. At this point its still working with the stock flooded batteries. While I was writing this Battleborn called to say my online order will be delivered next week, so on to the next project…