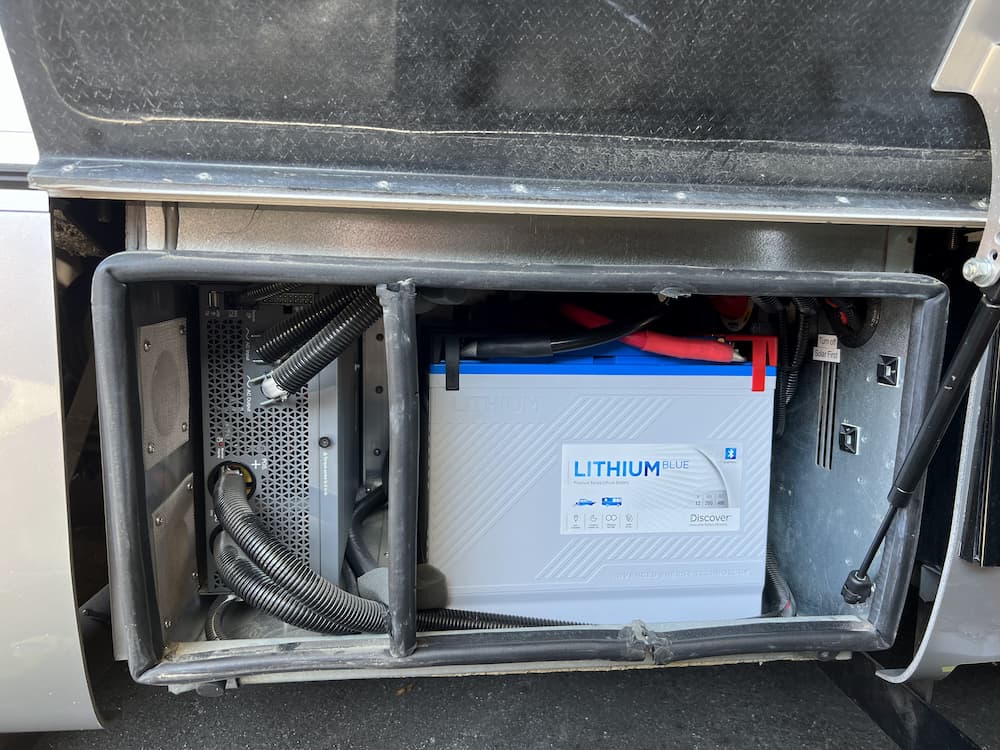 This will be my third Lithium upgrade in the same van. I’m unwilling to sacrifice any more space or weight, so I do upgrades as technology improves. First it was (2) Battleborn’s, then (3) Renogy. All performed fabulously (some Renogy hiccups were just rough software and resolved themselves after cell balancing), and met my expectations, until I began to see a pathway towards more juice.

Over the past year I’ve been watching a couple smaller 200 AH batteries. (I need more than one battery for travels so far from home – as a battery failure would otherwise be catastrophic – and I can’t fit two 300s.)

One is the new 200 AH Victron. Its 44 lbs, about the size of a 100 AH battery, only taller. You might reasonably be able to get two into the battery box. But I already have a lot of stuff in the battery box, and the Victron requires an external BMS that takes up space also.

So I am planning to mount 2 batteries next to the inverter instead, which frees up the battery box for DC-DC chargers, solar charger, breakers, etc.

The Smart 200 Victron external BMS is a mixed bag in my opinion. Its pretty cool and eliminates the DC-DC charger (allows direct connect), but its a single point of failure. It has to talk to the Xantrex charger using the “ignition” line so it can ask the Xantrex to turn off charge (or load) if needed. After a lot of research I determined this will definitely work, but I’m not sure I have enough faith in Xantrex that I trust it not to destroy the batteries by not honoring the ignition signal someday.

Also a failing battery will turn off the charge (and load) for both, so I decided the external bms is not worth it for me.

The next entrant was Discover Battery “DLB-GC12-12V Lithium Blue 12V 200Ah Battery With BMS & Bluetooth”. This is also about the size of a 100 AH battery, only taller. (Although technically two may still barely fit in the battery box, its recommended to have ventilation above, so likewise I will put them next to the inverter)

Discover is a huge, old battery manufacturer. In fact they are the OEM supplier to LTV for AGM batteries still I think. This is the Discover Battery.

It has some cool features including a field replaceable BMS, integrated handle and built in battery terminal covers. Also the Bluetooth App that is just a about a requirement now if you want multiple batteries. All in 44 lbs. Its obvious they did a lot of research before entering the market.

I went back and forth between the Victron and the Discover many times, until a random search found this Discovery Discover Battery Sale. (Presumably by the time you read this it may be over)

This “overstock” sale is way lower than I have ever seen these and caused the left side of my brain to immediately pull the plug and order two. Price is not a determining factor for this upgrade at all, but it sure is nice to get 400 amp hours for $2398 plus tax, all from an “old school” north american manufacturer.

So they should be arriving as soon as they can ship them, and it will be another fun project to get these installed and see how they work out… (More to come!)

Received the two batteries today. Very nice build and the size is amazing – for perspective, one of my current Renogy 100 AH batteries in front of the 2 Discover 200 AH batteries. Discover is taller but otherwise occupying the same space although twice the capacity each. Amazing how much power is packed in these for the size!

Bluetooth app worked perfectly and I started a charge on the first one so I can fully charge before connecting in parallel. It will be a little bit before I get a chance to mount these in my van but I’m very impressed so far at least. Registered for their 5 year warranty. The warranty is a bit unusual in that they actually warrant a specific capacity in kwh. If the battery drops below that they will replace it.

So the next step was to charge them up fully before connecting in parallel, also to inspect the cell balancing and performance. These are going to be some work to install so I certainly want to be sure they really are keepers before getting them mounted.

I hooked up one battery at a time to my Old Magnum 1000 watt inverter to drive a heat gun on low. That will use about 75 amps which is perfect for a capacity test. Unfortunately I used a bunch of spare cables laying around from old projects, which, together with my fully trashed conference table, produced this mess of a deathtrap:

The WonVon was pretty cheap on Amazon and I didn’t want to buy A Victron shunt just for my workbench. But it actually worked out real nice. It has a Bluetooth interface so I could change settings and monitor across the room. It has the usual accumulated watts and state-of-charge displays.

So on to the testing and balancing!

And… The results are in:

So this is the WonVon monitor after around 2 1/2 hours of testing with the heat gun. I used up just over 192 amp hours of the battery leaving just 3% of its advertised capacity. I didn’t want to run it down to zero as, even though its OK once in a while (The BMS shuts down at 10 volts to protect the cells), its not ideal for cell life.

So far so good, but the Discover Battery Monitor is interesting:

This is immediately after I shut off the heat gun and turned the inverter off. As you can see it shows a higher reserve (7%) than there should be (3-4%). I forgot to screenshot it but the individual cells were at pretty high voltages – over 3 volts each – which represent an actual state of charge more like 10%.

So the bottom line is I feel pretty good about this battery. I think had I continued the test to scrape out those last few amps the actual usable capacity is going to be somewhat over the advertised capacity.

I’ll test the other battery later to be sure but so far these are very, very nice and will give me 400+ amp hours in quite a compact package.

Well something to think about… the cool snap on terminal covers… might not always be 100% cool. With a “normal” battery the terminals are above the battery. Exposed, yes, but easy to route stiff 2/0 cables to. In my tight space, it may be difficult to route a battery cable to these Discovers.

I started looking at right angle lugs, which I have used before, but the traditional Ancor ones would have the cable pointing towards the ceiling, which would still leave a tight radius for a turn.

And then I found these Elbow Magna Lugs. (the link is for the right, of course they also sell a left). I immediately ordered a few of each. These *may* fit perfectly and make it easier to slide the battery into a confined space…

As I suspected the unusual terminals on these batteries, while cute, caused a little extra brain cells to get used up. I ended up ordering and trying a variety of methods to use these in tight spaces. I tried 45 degree lugs, a Tesla bus bar, and various other solutions.

In the end Quick Cable Elbow Lugs (link just above) worked the best. These are truly massive lugs that are far thicker than anything I’ve ever seen. As a result a 2/0 die wouldn’t work on my crimper, or even a 3/0. On the third try I used a 4/0 die, which resulted in a pretty crimp.

It seemed a little too easy though so I sawed the test lug in half to inspect:

It looks good. Its shiny and has the qualities of solid copper with no spaces so I’m satisfied the crimps are good to use. Also on this huge lug there is space for 2 (slightly overlapping) crimps:

So this is the end that will go on the battery terminals and get the cable outside the lug recess. The other side of the cable gets an Ancor 90 degree lug that will go to the bus bars:

So now I just have to finish the 4 sets of cables and then try to slide these big boys in. I already test fit the first battery:

The first battery fits easily, and there is enough room for another. But I do have concerns that sliding in the second one is going to be tricky! Guess I will find out shortly.

Well this was a lot easier than I would have thought! The Unity Corner Bed Inverter compartment is WAY smaller than some other models (like Murphy Bed). (In case you are wondering, I installed my 3000 watt inverter on the opposite side of the usual configuration).

Still, the second battery slid right in – no problem. Because I took the time to find the right elbow lugs everything fits perfectly and they were literally just minutes to mount.

Here is the empty compartment, after I mounted the cables:

I used a Marinco dual switch and link bars, Class T fuse, etc – all connected together in the upper right. This configuration allows one switch to isolate the batteries AND switch the inverter on and off. I detailed the advantages and parts needed in a previous install.

The rear wall has a Blue Seas busbar for the battery negatives and a Victron BMV-712 Battery Monitor.

The two batteries easily slide right in. There is enough room to torque the positive terminals first for safety.

There is plenty of room on the sides and top. One of the super cool little things about these batteries are the built in mounting screws:

This allows a really quick and tidy installation – no ugly straps or messy hold down blocks. I could only easy reach the front screws but they are still very firmly attached.

I threw the Marinco Switch, and satisfyingly, no magic smoke!

These batteries are very impressive so far. A five year warranty, old and established North American manufacturer and far denser and smaller than almost anything on the market, all at a very reasonable price. I’ll make a final update to this post once we get a chance to make our first short run with them!

The wiring I used was Ancor Marine wire. I’ve also listed many of the parts and tools below that I purchased before this install: